When I was looking for my next game to review and going through some Amiga game sites I spotted Beverly Hills Cop. Instantly I knew I wanted to review this one. It has been a long time since I played this game. I remember that my second disk had a read/write error so I was never able to finish the game. The game is divided in four parts and I remember the first two parts. Every time you watched Beverly Hills Cop you wanted to fire up the game to be Axel.

You start in a warehouse gunning down baddies. The controls feel a bit clumsy especially when you have to shoot the enemy standing on a crate. The only way to hit them is to move forward in such a way that you also will take some hits. The start of the game is not really exciting and you start wondering if the next part will be any better. 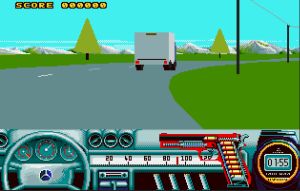 Great driving and shooting! At some moments you might end up in the grass and there is no way you can move the car back on to the road. You will hit post guaranteed. Actually ending up on the side of the road will happen a lot since you speed up and there are a lot of curves in the road resulting in loosing control. Another issue is that if you end up on the side of the road you have 8 seconds to get back on to the road. I had a hard time not hitting other cars and I thought by driving slow I might make it but surprise you have cars hitting you from behind. The whole driving part does not feel right and it annoys me a lot. 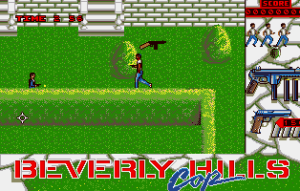 Beverly Hills Cop – Outside the Mansion

I never played this part in the past so let’s hope it will get better. When it starts the game for some reason it is in the mouse control mode and not joystick mode control. After consulting the manual I found out that the J key will allow you to switch. It seems Axel has mind of his own since he keeps moving while I desperately try to gun down some baddies before they gun down me. After a few attempt I am getting really frustrated with the game. And yes the graphics are horrible. If this was baseball it would be the end of it since on my score card it has 3 strikes. I don’t have much hope for the last part of the game but I would love to be proven wrong.

Beverly Hills Cop – Inside the Mansion

Right away I get that Doom feeling the way this part is set up. Since the previous part I have the manual on standby and already know that the controls are the joystick but you require the keyboard as well. The Z key will move your sight to the left and the X key will move your sight to the right. This combination does not work very well since when you move in to a room and have to move your sight and there happens to be a bad guy you will already have taken hits before you can fire a single shot. From all four parts of the game this does score the highest but that does not mean it is that good. It starts good but gets boring as you wander through the mansion getting lost and not seeing a lot of baddies.

Well what can I say? They really did do a poor job on this game. I have to say that there was this urge to finish the game. I think I have to contribute this to the movie. You sort if have this feeling it will get better. I really wish they would have made it more like the movie and since they did not they should have made a much better “OK, it is not like the movie but it still kicks ass” game. The only great thing about the game is the music. Everyone knows right away what song it is when you hear those first notes. For me it really is a one time play and not a Friday evening filling game. Friday evening filling game? Yes, that one game that keeps you busy all Friday evening and also any other Friday evening.

There is a big difference in the ratings when you see that the lowest is 42% and the highest is 85%. My opinion is that the ratings given by those magazines are far from reality.  So what will be my rating for Beverly Hills Cop? I was never able to play past the first two stages and if I deed I would have realized at the time it was not a very good game. The only part that scores good is the title music. I would love to hear everyone else’s opinion about Beverly Hills Cop.

The Bucket Diary gives it a rating of 10%.

My next game review will be about Beverly Hills Cop. It has been a long time since I played this game. I am really curious what my take will be on this. They are good memories so let’s hope I will not be disappointed.

I got some big plans for my Bucket Programming Corner regarding programming on OS4.x. I want to start with Intuition/ReAction and expand on it. The idea is to cover as much on this as possible and make you understand it all so you can go off and create your own stuff. I talked about it before but there is so much difference between everyone doing this. I see people saying don’t do this while other people do use it. I even struggle with it myself since following the “official” guidelines (as far as they exist) result in none working code for me. Once I have fixed that I will start with the first tutorial of many. It also has been a while since I posted a new tutorial in this section. But trust me it will be worth while waiting for this.

I had to get some help from the forums and I noticed the best results are on AmigaWorld.NET. Besides AmigaWorld.NET I also go to Amigans.NET but I get quicker replies on AmigaWorld.NET. At some cases I never get a reply on my forum postings over at Amigans.NET. This clearly has to do with the amount of users on both sites. I don’t go to Amiga.org since I can’t get my user account to work. For some reason it won’t let me set it up complaining the user already exists. I used a mail address that is no longer active so I needed to have this changed s0 I did mail for help and after a really long time I got a reply back last year in February asking if I still had this issue. I did reply yes but one year further it still is not resolved and I can’t be bothered with it any more. That’s it for this week’s column. The game review is pretty much done so expect this to be posted this week already.